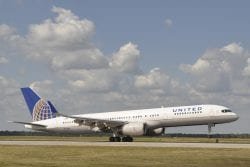 United Airlines today announced it is tripling the size of its August schedule compared to its June 2020 schedule, adding nearly 25,000 domestic and international flights compared to July 2020, and plans to fly 40% of its overall schedule in August, as compared to August 2019. While travel demand remains a fraction of what it was at the end of 2019, customers are slowly returning to flying with a preference for leisure destinations, trips to reunite with friends and family, and getaways to places that encourage social distancing. According to TSA, more than 600,000 passengers passed through airport security checkpoints on Monday, June 29, the first time since March 19 that those numbers exceeded 25% of pre-COVID levels.

United has overhauled its cleaning and safety procedures under United CleanPlus and is  giving customers more flexibility when booking by extending its waiver of change fees and award redeposit fees for reservations through July 31.

United plans to add more than 350 daily flights from its U.S. hubs in August, including doubling the number of flights from New York/Newark compared to July. This increase includes more flights to mountain and national park destinations like Aspen, Colorado; Bangor, Maine; Bozeman, Montana; and Jackson Hole, Wyoming. Internationally, United’s August schedule will include a return to Tahiti and additional flights to Hawaii, the Caribbean and Mexico. Across the Atlantic, United will add more flights and options to Brussels, Frankfurt, London, Munich, Paris and Zurich.

“We’re taking the same data-driven, realistic approach to growing our schedule as we did in drawing it down at the start of the pandemic,” said Ankit Gupta, United’s vice president of Domestic Network Planning. “Demand is coming back slowly and we’re building in enough capacity to stay ahead of the number of people traveling. And we’re adding in flights to places we know customers want to travel to, like outdoor recreation destinations where social distancing is easier but doing so in a way that’s flexible and allows us to adjust should that demand change.”

Domestically, United plans to fly 48% of its 2019 schedule in August compared to 2019 levels, up from 30% in July. Travelers in search of more socially distant vacation options like beach, mountain and national park destinations will see more opportunities for leisure travel in United’s August schedule. Highlights include:

“United’s international schedule continues to be guided by customer demand as we add back capacity in regions with relative strength,” said Patrick Quayle, United’s vice president of International Network and Alliances. “For August, we’ve seen increasing demand for leisure travel and have added options to places like Cancun and reinstated service to Tahiti. Additionally, we are further building out service to partner hubs like Frankfurt and Zurich, where customers can connect on to a wide array of destinations.”

Internationally, United is scheduled to fly 25% of its schedule in August, up from 16% in July. Across the Atlantic, United plans to offer customers more opportunities to get to Europe and beyond, with more flying from Chicago, New York/Newark and San Francisco. Highlights include:

Upon government approval, United will restart daily service between Delhi and San Francisco and New York/Newark.

Across the Pacific in August, United is scheduled to restart three-times-weekly service connecting the mainland United States and Tahiti. In July, United made several changes to its Asia Pacific schedule. Highlights of United’s service include:

Throughout Latin America and the Caribbean, United is expanding across each region with a total of 35 new routes for August. Highlights of United’s schedule include:

Committed to Ensuring a Safe Journey

United is committed to putting health and safety at the forefront of every customer’s journey, with the goal of delivering an industry-leading standard of cleanliness through its United CleanPlus program. United has teamed up with Clorox and Cleveland Clinic to redefine cleaning and health safety procedures from check-in to landing and has implemented more than a dozen new policies, protocols and innovations designed with the safety of customers and employees in mind, including:

Survey: 8 in 10 Small Businesses Have Re-Opened in Some Capacity