Posted by: Duncan Idaho in In the News July 19, 2019 Comments Off on United Launch Alliance Interns to Launch 35-Foot-Tall Sport Rocket

Centennial, Colo. (July 19, 2019) – As the world commemorates the 50th anniversary of the Apollo 11 moon landing, a group of United Launch Alliance (ULA) interns will launch their own rocket containing payloads built by Ball Aerospace interns and K-12 students from across the country. 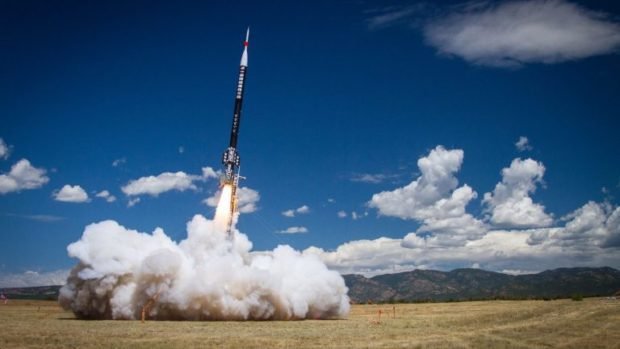 The Student Rocket Launch, sponsored by United Launch Alliance and Ball Aerospace, gives students from kindergarten through graduate school hands-on experience working with rockets and payloads (on board experiments and instruments deployed after launch). The program aims to inspire the next generation of scientists, engineers and space entrepreneurs.

This year’s event, which will take place July 20 at the Fort Carson Army Post, features the launch of the 35-foot tall intern-built rocket, named the “Future Heavy Super Sport.” The rocket will reach a peak altitude of 5,500 feet while carrying payloads built by the Ball Intern Rocket Science Team (BIRST) and teams of K-12 students from across the country.

“This year’s Student Rocket Launch honors the legacy of American leadership in space exploration and sets the stage for a new generation to build on that heritage,” said United Launch Alliance President and CEO Tory Bruno. “From the K-12 students through our undergraduate and graduate student interns, this ULA and Ball Aerospace program reaches and inspires the rocket scientists, engineers and space entrepreneurs that will shape our future in space.”

Some of the payloads in this year’s event include data sensors, rovers and a scale model of the Apollo 11 Lunar Module, which carried NASA astronauts Neil Armstrong and Buzz Aldrin to the moon 50 years ago. When submitting their proposals, teams chose whether they wanted to compete for a chance to win up to $5,000 for their school or sponsoring nonprofit organization by guiding their payload closest to a designated ground-based target.

The Student Rocket Launch program simulates a real-life launch campaign so students can experience a condensed version of the rocket building and launch process. Over an eight-week period, students work on their own time to design, build and test the rockets and payloads with the guidance of mentors from ULA and Ball Aerospace.

“The BIRST program provides an authentic engineering experience for our interns,” said Rob Strain, president, Ball Aerospace. “Designing and building payloads that must survive a launch and operate in space is a great challenge, and our long-running partnership with ULA offers our Ball interns a real-world application.”

In addition to the Future Heavy Super Sport, the Student Rocket Launch also will include the launch of several smaller high-power rockets that will reach altitudes of more than 9,000 feet above ground level.

Look for the hashtag #StudentsRockIt on social media for updates and photos from this year’s event. Visit our Intern Rocket page for more information on the Student Rocket Launch program.

READ  Venezuelan Security Forces Must Help Get Humanitarian Aid Into Venezuela
Wake up Right! Subscribe to our Morning Briefing and get the news delivered to your inbox before breakfast!
2019-07-19
Duncan Idaho
Previous: Border Patrol in Maine Arrest Illegal Laborers based in Massachusetts
Next: U.S. Department of Transportation Permanently Bans Commercial Drivers Convicted of Human Trafficking