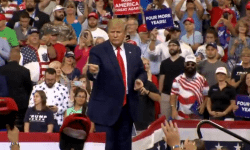 The rally is being held despite the city’s mayor trying to extort the Trump campaign by charging $500,000 for security – a ridiculous and unprecedented amount.

The mayor attempted to force the Target Center to cancel the rally if Trump didn’t pay up. The president’s lawyers threatened to sue the arena for breach of contract if they cancelled.

The rally is on, Minneapolis’ mayor lost his sad little political play and once again – Trump wins.

The president is scheduled to speak at 7:00 PM CDT.