Watch Trump: This should never happen to a president again

Posted by: R. Mitchell in In the News March 26, 2019 Comments Off on Watch Trump: This should never happen to a president again 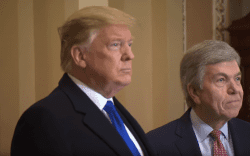 President Donald Trump took questions from reporters just before attending a Republican Policy Lunch on Capitol Hill and during the exhange he said that what Democrats and the media have done to him over false collusion claims shouldn’t ever happen again.

“This should never happen to a president again,” he told reporters.

The Mueller Special Counsel report said that neither the president nor any member of his campaign colluded or conspired with Russians to impact the 2016 presidential election. There was no recommendation for charges against any member of the administration or campaign for obstruction, treason, or any of the other false claims made by members of the Obama Justice department and intelligence community.

The president also briefly spoke about his administration’s belief that Obamacare should be stricken down in full. While not directly addressing the Justice Department’s backing of a Federal Judge’s ruling that Obamacare is unconstitutional, he hinted that Republicans will soon release a health care plan of their own to replace it.

“The Republican Party will soon be known as the party of health care,” he said.

Q Some Democrats, sir, are still talking about impeachment. What’s your response to that?

THE PRESIDENT: I don’t think they’re talking about impeachment. We have the greatest economy we’ve ever had. Our country is in incredible shape. They and others created a fraud on our country with this ridiculous witch hunt, where it was proven, very strongly, no collusion, no obstruction. No nothing.

We are doing so well. We’ve never probably had a time of prosperity like this. It’s been great.

Q Mr. President, you’re accusing the people who launched the investigation into your campaign of treasonous acts.

Q How high up do you think it went?

Q Mr. President, do you think it reached the West Wing of the Obama White House?

THE PRESIDENT: I don’t want to say that, but I think you know the answer.

Q Mr. President, the report says that while you did not commit a crime —

THE PRESIDENT: Who said what?

Q On healthcare — on healthcare: Your administration is making very clear that you think the Affordable Care Act is invalid and should be struck down. What is your message to Americans who may be concerned about their healthcare?

THE PRESIDENT: Let me tell you exactly what my message is: The Republican Party will soon be known as the Party of Healthcare. You watch.

Watch Trump: This should never happen to a president again is original content from Conservative Daily News – Where Americans go for news, current events and commentary they can trust – Conservative News Website for U.S. News, Political Cartoons and more.

READ  CBP at LA/Long Beach Seaport Seizes Over 52,000 Illegal Gun Parts from China
Wake up Right! Subscribe to our Morning Briefing and get the news delivered to your inbox before breakfast!
2019-03-26
+R. Mitchell
Previous: Breaking: House fails to override Trump’s veto over national emergency
Next: Did Smollett Pay-Off the City of Chicago to Drop His Charges?