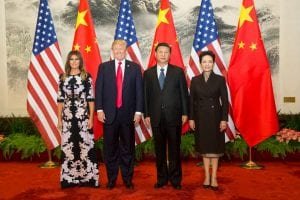 For the last two days, high-ranking officials from the United States and China have engaged in intense and productive negotiations over the economic relationship between our two countries and while progress has been made, President Trump made clear that March 1st is a hard deadline.

“President Donald J. Trump has reiterated that the 90-day process agreed to in Buenos Aires represents a hard deadline, and that United States tariffs will increase unless the United States and China reach a satisfactory outcome by March 1, 2019,” the White House said Thursday in a statement. “While progress has been made, much work remains to be done.”

The talks covered a wide range of issues, including:  (1) the ways in which United States companies are pressured to transfer technology to Chinese companies; (2) the need for stronger protection and enforcement of intellectual property rights in China; (3) the numerous tariff and non-tariff barriers faced by United States companies in China; (4) the harm resulting from China’s cyber-theft of United States commercial property; (5) how market-distorting forces, including subsidies and state-owned enterprises, can lead to excess capacity; (6) the need to remove market barriers and tariffs that limit United States sales of manufactured goods, services, and agriculture to China; and (7) the role of currencies in the United States-China trading relationship.  The two sides also discussed the need to reduce the enormous and growing trade deficit that the United States has with China.  The purchase of United States products by China from our farmers, ranchers, manufacturers, and businesses is a critical part of the negotiations.

The two sides showed a helpful willingness to engage on all major issues, and the negotiating sessions featured productive and technical discussions on how to resolve our differences.  The United States is particularly focused on reaching meaningful commitments on structural issues and deficit reduction.  Both parties have agreed that any resolution will be fully enforceable.

Don’t have CBS? Here’s how to watch the Super Bowl this weekend

CBP Officers Seize $10.1 Million Worth of Narcotics at World…