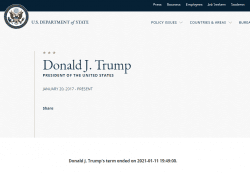 Editor’s Note: This is a developing story and will be updated as events warrant

It’s difficult to comprehend why President Trump and Vice President Mike Pence’s biographies on the U.S. Department of State’s website claim that their terms will end Monday night, but they do.

So if you’re wondering who would be president until January 20 since Pence is supposedly out, it’s Speaker Nancy Pelosi according to the Presidential Line of Succession.

Honestly, a hack is the most-likely reason for the erasure of both Trump and Pence’s biographies and the oddly chosen timestamp for the end of their terms, but without a State Department statement, it’s hard to say. And, State isn’t commenting just yet.

Shortly after we published this article, we refreshed the president’s page to see if there was an update. Nope, but things aren’t going well:

CBP Officers Intercept Methamphetamine Worth Over $2.8 Million at the…