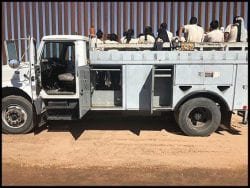 YUMA, Ariz. – Yuma Station Border Patrol agents prevented 21 illegal aliens from being smuggled in a utility vehicle along the border.

Monday morning, a group of 21 illegal aliens crossed into the United States along the Colorado River and attempted to load into a large utility vehicle. Yuma Station agents responded to the location and thwarted the smuggling attempt. Seventeen illegal aliens were apprehended and five fled to Mexico, including the driver of the utility vehicle.  While securing transportation for the large group, one illegal alien jumped off the truck and fled to Mexico. The subject was immediately apprehended by law enforcement partners in Mexico.

The utility vehicle was registered in Las Vegas, Nevada, but had Arizona license plates affixed to the vehicle. A thorough search of the vehicle revealed there was no means of escape from the inside of the compartments, indicating that the illegal aliens were going to be smuggled with no way of getting out on their own.

The individuals in the group, all Mexican nationals, were arrested for immigration violations and expelled to their country of origin under Title 42 authority.  The escaped subject, who was apprehended by Mexican law enforcement, will be charged locally by the Mexican police.